We’ve had this for a while on Being Outside Cricket, as earlier in the summer MiaB produced some interesting data on moving averages to give another indicator on form and consistency. Here MiaB updates the data set and has a punt on some of the Aussie selections. Like most, even he didn’t see Paine being inflicted. My thanks, as always, and I hope to see more of this in the future. Take it away…..

This is an update on the “twenty innings moving average” (TIMA) method of analysing batting form that I introduced back at the start of the last UK domestic test match season.   LCL suggested that I should give an update just ahead of the next Ashes series to see what thoughts it prompts.  Just as a reminder, I take the last 20 innings and draw the average from them.  After the next innings, I subtract the innings at the start of the series and add on the latest score – so it is a running average of the 20 latest scores.

If we start with Cook, the conventional wisdom is that he had a good summer – 572 runs at an average of 44 – and certainly the usual suspects have been quick to applaud this return to form.  If however you apply a little of what some people disparagingly characterise as “Root maths”, you will recall that 243 of those runs came in a single innings.  So in his other 12 innings, he “only” scored 329 runs at 27, which suggests that there are some problems with the conventional wisdom.  If we turn to the moving average method, we find that at the end of the Chennai test his TIMA stood at 41.  This calculation includes his 2 previous centuries – the 130 at Rajkot and the 105 against Pakistan at Old Trafford.  After his first innings at Lords against South Africa, this last century drops out of the calculation and the moving average starts to drop until it reached a trough at 30.85 at Trent Bridge.  When he made his marathon 243 at Edgbaston, the Rajkot century was still in the running average, so up it goes to 47.  But in the final test of the summer it slips out of the calculation and he starts the Ashes series at 39.4.

His moving average since November 2015 (the Sharjah test against Pakistan) where it last got above 60 has been a little like a W, but on a slope so that each peak is a little lower than the one before and each trough a little deeper.  This certainly suggests a batsman in decline – that Sharjah test is 49 innings ago.

I didn’t get to see much of Cook before 2010 because of work commitments and I have only really watched him since about 2014 but I wonder how much his technique has changed over the years.  One thing that strikes me is his elaborate trigger movements.  During the bowler’s run up, he goes through an intricate series of fidgets, shuffles, and bodily contortions so that, when the bowler’s arm comes over, he is balanced and ready to play whatever shot is required.  Any slight error in the timing of this set of moves and he is likely to get caught in strange positions, as seemed to happen a lot over the last summer.  Of course, there are times when he gets it right consistently and gets runs but this is not happening quite as regularly anymore.  Was he always like this at the crease?  I imagine the selectors and coaches must be slightly concerned by this but obviously I am not calling for him to be dropped.  For one thing, he would have to be replaced and we still have not managed to replace Strauss.  However, it is fortunate, shall we say, that all the media focus is on the guy at the other end, whoever it turns out to be for the Ashes.

Root, on the other hand, has had an unequivocally good summer. His TIMA remains above 45 and, for 7 of the 13 innings I am looking at, it is above 50.  You cannot quibble with figures like those.

Bairstow is a cause for concern, however.  He came back from India with his moving average at 44 after a decent tour.  This summer, it has just dropped and dropped till it now stands at 36.  I believe he is a better batsman than this – and in fact before the South Africa tests his career average stood at 41.  It has now dropped to 39.8.

Stokes is another person who has had a good season – 527 runs at 43.9.  However his moving average is stuck around the mid-30s.  It has been less than 40 for 80% of his career.  I know that the media is full of despair at the idea of Stokes being absent from the Ashes but quite why people make him out to be England’s last hope is beyond me.  Yes, he is capable of the occasional remarkable innings but, just as an example, only 1 of his test hundreds has been higher than 150.  Although his last 10 innings have yielded 470, the 10 before that produced 245.  Of course, he is unlikely to face as much spin in Australia as he did in India – with the proviso that he might not get there – and the pitches should be less awkward.

If the figures suggest that Stokes is over-rated then Moeen is surely under-rated, which probably suits him.  He seems to thrive when the spotlight is not upon him.  He has had his usual up and down season but after Chennai  his TIMA was 43.83 – a figure which Stokes has only bettered 7 times (when he had both his 258 and the 128 at Rajkot in his numbers) – and it stayed above Stokes’s numbers for 6 of the 12 innings they played.

Turning to Australia, the problem is that, as so often, the likely team contains a number of people with little test experience.  Their last team included Renshaw (18 innings), Handscomb (19 innings) and Maxwell (14 innings).  It seems to me that Australian sides for the Ashes have almost always included a number of batsmen unknown to their opponents.  We are left with Smith – unless injury rules him out – who has astonishing figures.  In his last 14 innings his lowest TIMA is 57.89!

Warner, on the other hand, is going through a patch almost as rough as his initial period in test cricket.  Since his score of 163 at Brisbane against New Zealand in November 2015 fell out of his running average, his TIMA has dropped out of the 50s and hovered around 40.  Not as good as it used to but still very reasonable and better than most on the English team, apart from Root.

Wade is hovering around the mid 20s.  Khawaja whom I presume will be picked for the Ashes has got a good set of figures for his last set of 20 innings.  He was consistently averaging over 45 and sometimes getting over 55.  It strikes me that he has slipped under the radar on this side of the world.  I did not think there was much value in looking at Sean Marsh. 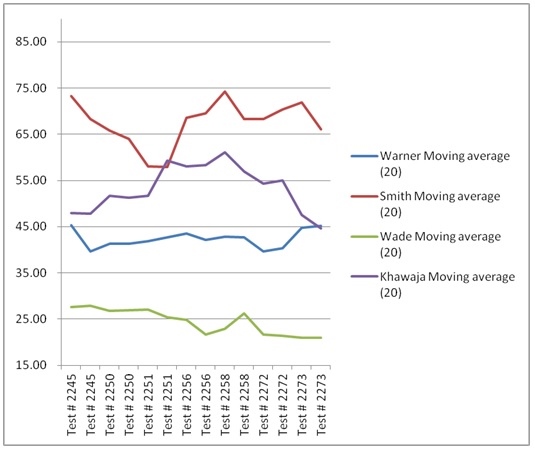 MiaB did add some charts, but I do need to find a better way of incorporating them in here. I’ll add them when I do it!