We like (well I like) a good anniversary and I thought I’d share this one with you tonight. 30 years ago we saw a brilliant individual performance by Ian Botham. It would be his last test hundred…

England resumed the first test at Brisbane on 198 for 2 against Australia. On the infamous “can’t bat, can’t bowl, can’t field…” tour England were decided second favourites but a very good Day 1 had them believing. However, Day 2 did not get off to an auspicious start. Allan Lamb and Bill Athey, the two overnight batsmen fell, and this brought David Gower and Ian Botham to the crease….

I may have lost a lot of my regard for Sir Ian in his life as a commentator, but this was pure gold and showed why we were big fans of his playing days.  Merv Hughes was vaunted as a new leader of the attack. Botham put him to the sword. Add to that the mental impact this had on the series. Hell, who knows if the 30th anniversary had a subliminal impact on Australia in Hobart this morning! We also got DeFreitas making 40 on debut, a half century for Gower and England went on to win the match.

Here’s a report by Tony Lewis on the day’s play: 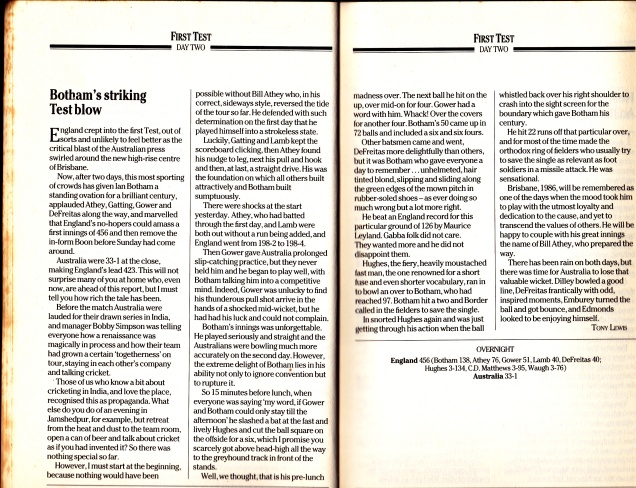 Happy memories of the Gabba, prior to it being turned into a soulless concrete bowl!

14 years ago today Dmitri was in Port Douglas, and England were in Hobart playing Australia A. It was a lovely Friday morning, and we were fresh off our journey to the Barrier Reef the day before (one of my great lifetime experiences) and Sir Peter and I were readying ourselves for a drive up to Cape Tribulation. Before we left we say Martin Love blatantly smack the cover off the ball when on about 7, the bent Aussie umpire had his deaf aid switched off, and Love went on to make 201 not out.

I’ll be returning to these tours post Christmas, when we have a large void to fill in the run up to the English summer, but any memories you have of 1986, let me have them….