First up, some house notes.

TLG and I have full-time jobs and other things we need to do over and above this blog. This means that we put a great deal of trust in you to do the right thing in the comments because we can’t monitor 24/7. We don’t set rules or parameters, we aren’t a newspaper or a paid-for or getting paid to do blog. We’re a couple of blokes with something to say. If we spot something that we think goes beyond what we think is acceptable in the comments, then we moderate (often to decide whether to allow or not). That we’ve had to do so on such an infrequent basis is testament to you, but we also know feelings run high.

If you have a complaint on anything you’ve read that you think is beyond acceptable, and it remains, please e-mail me on dmitriold@hotmail.co.uk or if you follow me on Twitter, tweet me (@dmitriold ) .

With that out of the way, I thought I’d usher in the start of the county cricket season with a little piece on our domestic game.

The subject of county cricket is really one of those that can never be solved. I had a go at this Schleswig Holsteinshire and if anything, in the light of the comments from Russell Degnan, I’ve probably hardened in that view. I don’t think the will exists, or the solution apparent, that will give us the perfect domestic structure on which to go forward. There are many out there, many county members, who do not give a flying one about international cricket. They don’t all reside in Yorkshire either. It struck me in my time as a member at Surrey how little the membership cared about their players reaching international honours. “county cricket does not exist to fill the England team” was a very common remark.

County cricket is increasingly becoming like exclusive art galleries. It may be of substantial aesthetic value, of increasing nostalgic value as it ages, and available only if you are really committed to it, and that may be the problem. No-one is advocating demolishing old institutions and starting again, but we live in an age where a repackage here, a new broom there, can create something from nothing. After all, our top division was always the envy of Europe (with the possible exception of Italy) in the 80s and early 90s, but repackaging as the Premier League, giving clubs a few more quid, and lo and behold, the whole projection has changed. Despite the product sagging a little in the past few years, it’s still iconic enough to get the largest TV deal in UK sporting history by a distance. All the time this method, of buffering and repackaging, as Mark calls it “making it an event” tempts other sports. Rugby Union and Rugby League went through a revolution, with Heineken Cups and league play introduced to Union, and SuperLeague in Rugby League. The PGA Tour in golf has inhaled every other tour, so that there is now one source of the highest quality golf. Tennis had been a pioneer in this, with the ATP  and WTA Tours. Of course, the inspiration for many sports now is the NFL. The Champions League is desperate to bill its annual football final as the Superbowl of football. The problem with that is that in every year ending in an even number, there’s arguably a much bigger game being played less than six weeks later!

So English domestic cricket stands still. And is there anything inherently wrong in that? It depends on how you “consume” it, maybe?

Some out there on this blog do not bow down and worship to the current county cricket structure. For the purposes of this I’m leaving out the T20 debate for now as that’s separate. From my standpoint there’s not a lot of emotional investment in it. I can compare my feelings for sports teams across the sports – my club loyalties are Millwall, Boston Red Sox, Miami Dolphins, Chicago Bulls, Wigan Warriors, and, of course, whichever T20 team KP plays for!!!! Surrey are on a par with my rugby league favourites. I like it when they win, don’t get too bothered when they don’t.

The great Surrey team of the 1999-2004 era, roughly, coincided with the time I was a member. I got to see  some great cricket, with the common thread for much of my enjoyment being Ally Brown, Adam Hollioake, Saqlain Mushtaq, Martin Bicknell and for the second half, the imperious Mark Ramprakash. It was a golden time to watch them and I thoroughly enjoyed my days out. I was actually committing myself to watch them even more in 2005, my penultimate year as a member, but that came to an abrupt halt when my mum was diagnosed with cancer. I’d seen a few days of the initial games, got down to T-Wells as well, but things were to take a bad turn.

The other thing that kept the interest in the County Championship was our annual Fantasy Cricket competition, based on the scoring system that was developed by Fantasy Football. There it was – one point for ever twenty runs, five bonus points for a hundred, minus one for any non-bowler for a score under 10, -2 for anyone at all who was dismissed for 0, one point for a catch, two for a stumping, two points for a wicket, five point bonus for five wickets, minus one for ever 20 runs conceded. Got all that? Teletext and the internet were on overload in the glory days. Legendary pick-ups like Mike Hussey (when no-one knew who he was) got our pub discussions going – Joe Scuderi was legendary for other reasons. Now I doubt I could get four people interested in this – in those days we had leagues of nine or ten! It did mean that team news was gobbled up, any snippets we could get on the wires eagerly awaited, and scorecards followed assiduously. Once the league died in 2008 (I ran it after a succession of others – we had a few people leave work, so got tougher to arrange) county cricket wasn’t an obsession. (I recall another notable thing from the latter days of that competition was I had to get squads and try to classify the players. One Kevin Pietersen in his first season was classed as a bowler in my annual player list. Imagine the glee of my colleague when he had immunity for scores under 10 for a prime batsman, Fantasy cricket was a batsman’s game, and KP racked up double hundreds while sitting at 11 in his batting order! Bastard).

Now how do I see County Championship cricket? A decent day out with mates might be the best answer. Last year I went to Surrey v Derbyshire on a rain-affected day, which was memorable for meeting Benny, and then had a terrific day at Lord’s for Day 3 of the Middlesex v Yorkshire game where I saw Toby Roland-Jones make his maiden hundred, and got the chance to meet  Mr Declaration Game and Mr Tim Wigmore. These days out, especially if we get lucky with the weather, are relaxing, get me away from work, and generally end in great days out with my good mates. The cricket, frequently, matters only when I’m behind the camera. That’s a bit harsh, actually, because I remember snapping away at Surrey v Middlesex through the zoom on the lens, and watching the mastery of Hashim Amla on a raging turner a few years back. That sort of thing isn’t too common, though. 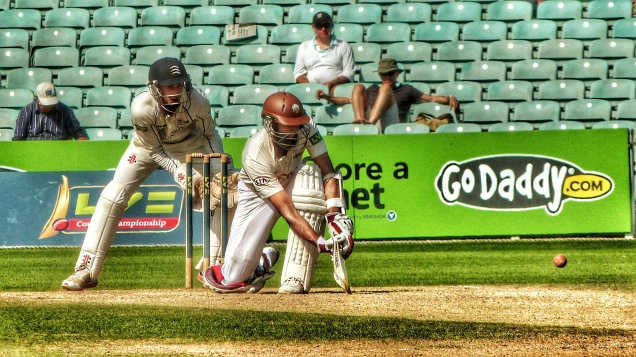 Too often, county cricket is used by some as some sort of badge of honour, a kind of haughtiness ensues when people discuss it. “Oh, don’t spoil our discussion on the merits of [insert jobbing county pro] with your international cricket stuff. I’m just not interested.” Fine, if that’s your boat, set up a county cricket discussion board of your own. I was warned off this early in my enhanced blogging career (2014) by nonoxcol, when I made the mistake of trying to bring some ECB issue into a county discussion. In my opinion this is part of the problem with the county structures and the long-form of the game. There’s too much inherent snobbery in it. I used to say that when the Beautiful South wrote a song, I thought they’d finish it, and congratulate themselves on how clever they were. That’s the impression I get of a number of county cricket fans. By no means all – I’ve had some great conversations with total strangers at county matches – but if you go to games, and read about them, you get the picture.

It’s easy to like the county championship. It’s relatively cheap – £15-£20 to watch decent quality stuff and the ability not to be held hostage by the catering arrangements at international and T20 games is really pretty OK. I like the peaceful atmosphere at The Oval and Lord’s on a working day, amidst the hubbub of the massive metropolis. It’s soothing and makes you feel light years away from your office, when it is really only a short bus ride away. Then there’s going to Guilldford, or T-Wells, or Chelmsford, or Arundel as we have over the past few years (not forgetting Whitgift and Southgate) and being a little more up close and personal – seeing KP at Whitgift, Ricky Ponting at Arundel  and Shane Warne at Southgate is just something else – which is a great day out. I’m looking to get down to Hove for the first time in 39 years this summer, for example. But this is about my personal enjoyment, not really an emotional investment in a competition or two.

That’s not sustainable as a business model. It never will be, so why try? It might just be time to accept that the County Championship is like it is, because that is what it is. An anachronism, never likely to be self-funding, always likely to be a compromise, and more likely to become skewed to the haves rather than the have nots. I just request that those who love it, cherish it and breathe it don’t act as if they are some higher power, someone sent from the Gods of Cricket to save the international fans from themselves, while also hoping and praying that those newly-retired or ensconced in press boxes don’t bite the hand that fed them and disparage it at every turn.

But what do you think? I notice when I write about the domestic game in the UK there’s a rather lukewarm response. I know this blog has an international audience, but the majority of hits and comments are from the UK. Have a say. Speak up. Say what you think.

Predictions? Can’t see past Yorkshire, Warwickshire might run them close, not sure Middlesex can repeat what they did last year, can’t see my mob pulling up any trees. I start off with good intentions to go to watch it, but only go on very few occasions.

We have a trial type of post coming up related to this. Stay tuned.

23 thoughts on “I Steal From The Beggar’s Plate”