Excellent news… One of our regular readers, and participant on the Ashes Panel, has kindly volunteered to bring his coaching eye to this blog. It’s something different, but I’m absolutely delighted that he’s put this up for discussion and debate – Dmitri

The former England cricketer from South Africa has a new book being published in October and this time he is going to talk about batting technique. My guess is that there will be some new stuff there, some interesting stuff – some stuff that only people who are more than 6ft will be able to do in there (like comparing KP to Mahela Jayawardene). My other guess is that there will be little stuff in there that won’t be in Douglas Jardine’s book on batting technique written with Jack Hobbs – which I like using!! He will certainly talk about getting your head over the ball – something Jardine and Hobbs call “the topple” as your head guides your feet to the line of the ball.
What this book will suggest is that they way people practice and people’s mindsets have changed more than the shots themselves, in general – Dillscoops and Switch hits and others excepted. But this post isn’t about the the new and fancy, it is about just doing the little things right and not being too stubborn to change.
What I don’t understand is why we see people playing with such poor techniques at international level – look at Ballance and Bairstow, or Robson and Lyth (leave out Steven Smith for now!) – these guys have been scoring runs at county level but don’t have the basic technique for international cricket. I appreciate that nerves will play a part, however, I don’t understand why people don’t have a grasp of this when playing first class cricket. At what point will the selectors realise that talent alone isn’t enough. Why are batting coaches letting this happen? Why did the England Captain have to work with Gary Palmer to sort out his batting? Gary Palmer is a brilliant batting coach, no question, but what was Gooch or Ramps or someone else at Essex doing that they couldn’t see what was obvious and that Cook’s alignment was out and his hips were square on through the shot (a very very common fault with amateurs who are tying to hit the ball too hard). When I talk about alignment – this is what I mean – stances can be different – but feet and hips need to be aligned.

The top three show the batsman trying to hit the ball too hard – the back foot going onto the toe and the hips coming through the bottom show the batsman in defence and attack in a better position.
Below are rather better batsmen doing something similar. Vaughan’s position is tremendous through the shot, 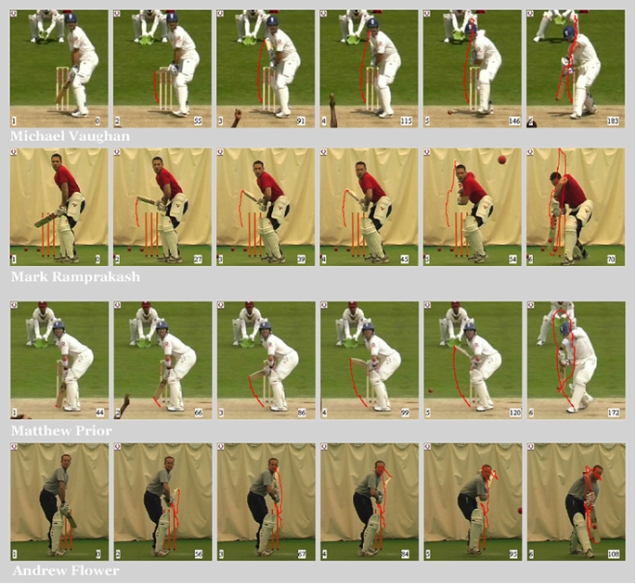 The basics of batting are simple – Grip, stance, alignment – as I say to my 5 year old in the nets – Head, foot, hit. If your grip and alignment is good and you move your head towards the ball – forward or from the back foot you can play the shot – and your weight will be moving through the shot. Gary Ballance isn’t really doing this. Chris Rodgers who sets up in a similar way absolutely does do that. 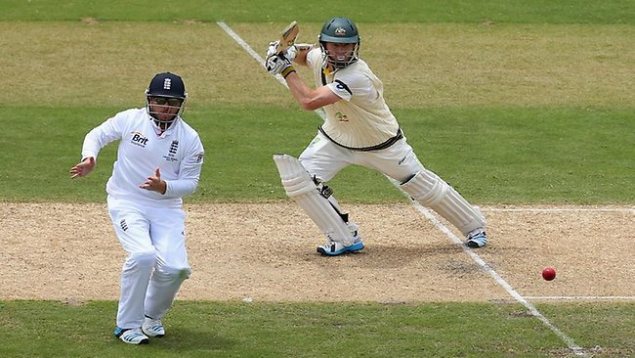 In the above picture – see the back leg and hip positions and how hard Ballance has gone at the ball compared to Rodgers. With Ballance he is more likely to knick off, much like this horrible position. 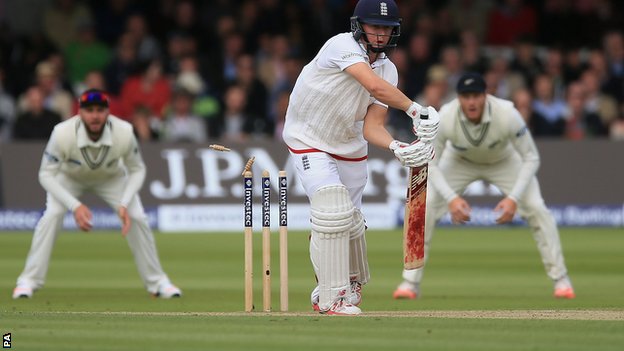 There was an ironic cheer when Steven Finn played a technically correct forward defensive shot on Sunday and followed it up with a second. On the highlights Mark Nicholas commented that it is a shot hardly played any more. Seriously – this isn’t hard and it certainly isn’t new.
Mark Butcher had to do a Nick Faldo and totally rebuild his batting so he could be an international player. Why isn’t Gary Ballance doing the same? Instead he is just doing what he always does and is now being touted for a recall – so will come back with the same issues. How can the England team improve by doing that? Moving him to number 5 wont change anything.
Here is Mark Butcher… again look at the back foot and hip position.

and for good measure one of Geoff…!

These issues are going to be exacerbated over the winter when we face the Pakistan and SA – against the spinning ball we the batters will need to be much more confident in getting right over to smother the spin in defence and to play the ball late in attack, being side on and playing the ball under your eyes will be crucial – as will being able to work the ball and rotate the strike. Also worth noting that there is no need to dance like headless chickens down the track against the spinners – you can use the width of the crease as well as the depth to change the bowlers line to your favour – Amla does this better than anyone as Jayawardene also used to do. I really worry for the likes of Bairstow in the UAE – it could break him, like it did to Eoin Morgan last time we were there.
Finally thinking about the mindset for batting for long periods, I can understand why players are struggling with this and knowing how to play – the difference between a 2020 game and a test match is impossible for an amateur to really understand, I also understand the happy hooker issues. But there are some things that can be used in all three forms to release pressure and to make batting long periods easier. Ali Cook scored 85 off 230+ balls over the weekend. But why wasn’t he rotating the strike more – when there were loads of attacking fields – why wasn’t he moving his position in the crease to stop Siddle bowling dots at him – and Cook wasn’t alone in this. These are simple things that should be second nature to a club batsman let alone an international. You don’t have to just smash boundaries to frustrate the bowlers. By making the bowlers work in different ways you take the pressure of you as a batsman. As a batsman you should be looking to put pressure on the bowler to do something different, whilst keeping things simple.
In a very harsh sense, I see Cook’s innings as a failure to score a hundred and get close to the follow on target by putting pressure back on the bowlers rather that the “wonderful rearguard innings” that it has been called (or words to that effect) – off the same number of balls he faced. That isn’t meant to be overly critical with wickets falling at the other end and with Lyon bowling well – it was a good innings, but avoiding the follow on should have been achievable on that pitch – which would have saved the game.
I hope these thoughts spark debate and challenge!
My thanks to Batting with the Bola, aka Philip Chapman, who can be followed on Twitter @pgpchappers . I’m not a technician at all and reading this was very interesting. Be interested to see if this is something our readers like, and if so, would love to invite BwiB back to do more of this.

14 thoughts on “Guest Post: Batting With The Bola…. On Batting!”