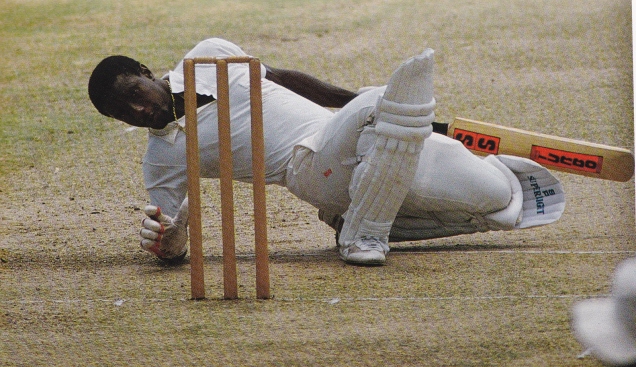 In the early days of overseas test coverage, watching some of Richie’s innings took my breath away, especially an amazing 182 against Australia at Guyana. I always loved the big floppy sun hat, the backlift, the drive, the cut, the hook. Richie was flamboyant. He had the look. While not quite the highest of the high in terms of a career, in his pomp he was unstoppable. Except in England where he never really hit the heights.

On this day in 1983, Richie took the field at the Wankhede Stadium in Mumbai for the first time as a West Indies test player. He didn’t get to bat until the 27th (rest day and a long Indian first innings), whereupon he made 0 (2 balls), LBW to Shvilal Yadav (who I instinctively remember when hearing either Umesh or Jayant’s name – no there is no relation). He made 26 in the second innings, falling to Ravi Shastri, but hadn’t done enough to cement his name into the West Indies team. He was dropped from the next test for Roger Harper.

Unbowed, and a couple of centuries at home later, we fast forward to 24 November 1984. Having missed out on selection for all the England matches in the fateful summer of 1984 (again Harper getting the nod most of the time), Richie returned to the West Indies team to face Australia, and promptly made a duck in his only innings at Perth (match starting on the 9th). However, at Brisbane two weeks later, on the second day of the match (the 24th), Richardson announced himself to the Aussie domestic public with a century. The Aussie players knew him well enough – he’d made a 131 in Bridgetown and a 154 in his home test in Antigua – but now the fans got to see what he was all about.

Clearly the Wisden scribe didn’t think too much of the innings. Other than being tied down by Holland, and dominated in a partnership by Clive Lloyd, it had this to say…

Well, that paints a picture.

24 November a debut for Richie, a first overseas ton for Richie. Much pleasure derived after that. As I said, one of Dmitri’s favourites!