A big day for Buttler, Anderson and England left them in the driving seat in this final Test of the summer. As well as their good play, they were also the beneficiaries of good fortune which really ended Pakistan’s slim chance of saving this Test.

In many ways, today was a mirror image of the day before with Pakistan’s middle order rescuing their team from an abject start. The tourist’s start was even worse than England’s managing to score just 34 runs when their fourth wicket early this morning. Asad Shafiq’s dismissal was also Anderson’s fourth wicket of the innings, and he has very much put to bed rumours of his retirement since his press conference. Shafiq might consider himself very unlucky, because the players left the field immediately after his wicket due to a rain shower.

When play resumed, there was a sense of deja vu as conditions seemed to settle down and favour the batting side like they had on days one and two. The pitch seemed slightly slow, and the ball had relatively little lateral movement once it had seen a few overs. The difference between the two innings of this game so far is that England managed to keep taking wickets at infrequent intervals to hold Pakistan well below the score they need to avoid the follow-on.

Fawad Alam’s fortunes this summer seem to have gone from bad to worse in this series. After 11 years in the international wilderness, he was dimissed for a duck. Today, he was dismissed after edging a ball from Bess which was caught by Buttler. Aside from having Jos Buttler catch something at the stumps, which earlier games have shown is not his forte, it also appeared from replays to have been a no ball which wasn’t detected by either the on-field or TV umpires.

Here is a screenshot of Jos Buttler, before Fawad Alam hits the ball: 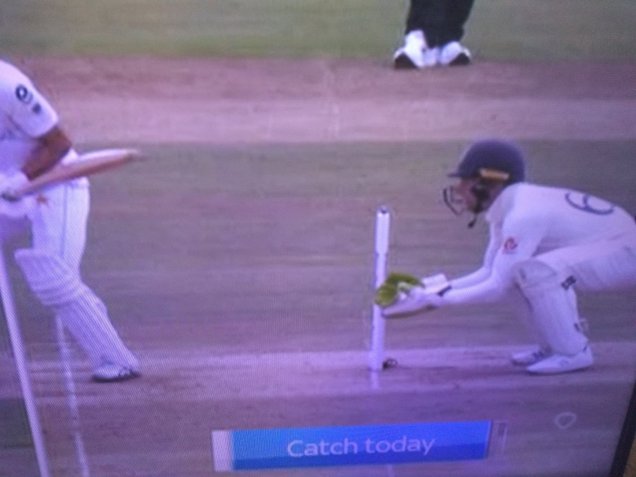 Ironically, this particular side-on replay was only shown once during a segment on Sky Sports which was demonstrating how Buttler’s technique at the stumps had improved from previous games. This point is true, and worth celebrating. Whilst I still wouldn’t pick him as wicketkeeper for a tour in spinning conditions, it has shown that he can improve this aspect of his game and hopefully that improvement continues. His adeptness with the gloves continued later in the game with two full-length catches on the leg side.

Whilst Buttler may have improved, England’s catching in the field was more of a mixed picture. Root took two chances in the slips, but Burns, Crawley and Broad all shelled chances. Hopefully these flaws across the England team are addressed before their tours this winter.

Whilst wickets fell at the other end, Azhar Ali played a fantastic innings of 141*. A Crawley-esque innings, you might say. Like Crawley, he has been under fire. Whilst undoubtedly talented, the Pakistan captain had scored just 38 runs in his first two games of the series. Unfortunately for Ali and Pakistan, he didn’t have a Buttler-esque partner to stick with him and Pakistan ended their innings 310 runs short of England’s total. England enforced the follow-on, but the players were taken off the field for bad light before the first ball was bowled. Pakistan might feel slightly aggrieved to have faced the second new ball in such poor light, when the umpires probably ended play in the previous Test under much better conditions.

To go with our observations on Friday about the ECB’s cozy relationship with Sky, it is interesting to consider what Sky’s coverage of Fawad Alam’s dismissal might have been like if Pakistan had taken the wicket of an English batsman with what would technically have been a no ball. Or how a Pakistani  broadcaster would have handled it had the game been played in Karachi. There is definitely a sense that host broadcasters often downplay or completely ignore incidents which might harm the home team, whilst reporting and repeating ones which might favour them. Many people might have opinions about the impartiality (or lack thereof) of the TV companies in India or Australia, but it would be a mistake to think Sky are any better. Despite being asked on Twitter about it by a journalist, and an article being posted on Wisden.com, it was never raised on Sky during play. Maybe, as well as neutral umpires, we could one day have neutral broadcasters as well?

Tomorrow will see Anderson trying to take two more wickets in order to reach the huge milestone of 600 Test wickets, whilst Pakistan have the distant objective of trying to force England to bat again.