Preamble: The West Indies have probably won all bar two sessions in this series so far, and while the story and expectation of the series has been that of the plucky underdogs taking a surprise lead, if they win the first two sessions today, that needs to change to recognising the dominant team. For yesterday was another grim one for England and another fine one for the hosts, and finished with Campbell and Brathwaite providing an object lesson to their English counterparts in how to leave the ball alone.

England failing to make the batsmen play is hardly new, and perhaps judging opposition standards by their own is almost understandable. But today they’re going to have to tighten up considerably to make any inroads, and the new ball is now not so new at all.

Still, all things are possible on a surface that has looked lively, acaseEngland must be confident that if they bowl well, they can get back into what would then become a rather short game. But the West Indies bowlers are considerably quicker than England’s – that looked like it made a difference in Barbados, and may well make the difference here. In which case, from a cricketing perspective, this is a very, very good thing indeed. Pace should be rewarded, not nullified.

In advance of the series, my personal fear was that Antigua would be a tourist board pitch. This is not the case at all. And that’s because the West Indies smell blood.

As ever, hit refresh for updates.

0829: The skies are a bit clearer than yesterday at this time, much less overcast. Not what England wanted to see.

0923: Funny how you feel at home so quickly in a ground. Day 2, know where everything is. Also striking how much quieter it was on the way, how much less traffic there was.

First photo of the day is England warming up. I’m sure they have many cunning plans. 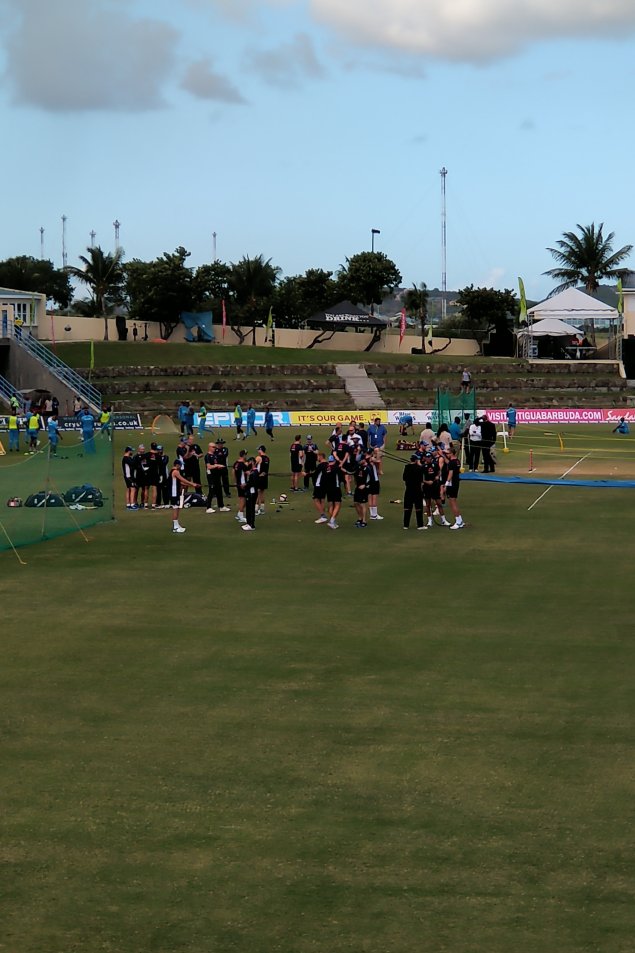 0955: Definitely quieter today than yesterday, markedly so. There were a decent number of people in on the cruise ships yesterday, that’s probably the difference.

1013: Broad seems to be bowling with a bit more oomph this morning. Can TV viewers confirm?

1050: fair to say Broad hasn’t had a huge amount of luck this morning. Oh look, a visitor: 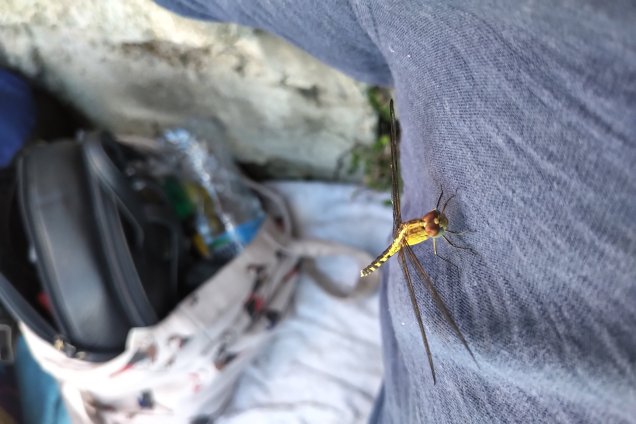 1100: Broad is stalking around the outfield like a man wanting to murder the world. Those overthrows just about topped it off.

1140: Looks suspiciously like England may have shot their bolt here. Runs are now starting to flow and the sense of threat has disappeared. And with a lead rapidly shrinking the time to say they are in deep trouble is approaching.

Meanwhile, over in the BPL, Jason Roy has just added another worldie to his collection 🙌🏿pic.twitter.com/Zi1yXp2zdS

1205: and that’s lunch. England bowled well early on, and really should have taken a few more wickets. But they didn’t, and the last hour has been pretty untroubled from a West Indies perspective. The run rate isn’t too high, and the second new ball is 30 overs away, meaning if England can take two or three this afternoon then the deficit might not be too big. But there’s the rub, it’s already turning to damage limitation, and there’s little evidence the West Indies will be as accommodating as England’s batsmen.

1313: The trouble is, there’s not a huge amount to say. Broad has looked head and shoulders above everyone else today, but the West Indies are just two down, and nearing parity. They’ve batted beautifully, without risk and maintaining their wickets. That England are trying hard is without doubt, but once again expecting the bowlers to bale the team out when they’ve been skittled again is not reasonable.

1325: look I don’t want to boast or anything, oh sod that, I trust you all appreciate my brilliance?

The thing is, sometimes, for no apparent reason, you feel you might be on the edge of a #stuartbroadday. #WIvENG

1417: Hiatus for lunch, sorry. West Indies in the lead, and England have the new ball in the next 7 overs. 50 as a deficit is manageable I suppose, and would represent a fine bowling performance. But then it needs the batsmen to go well.

1446: and that’s tea. And a fine over before the break from Nick Denly… 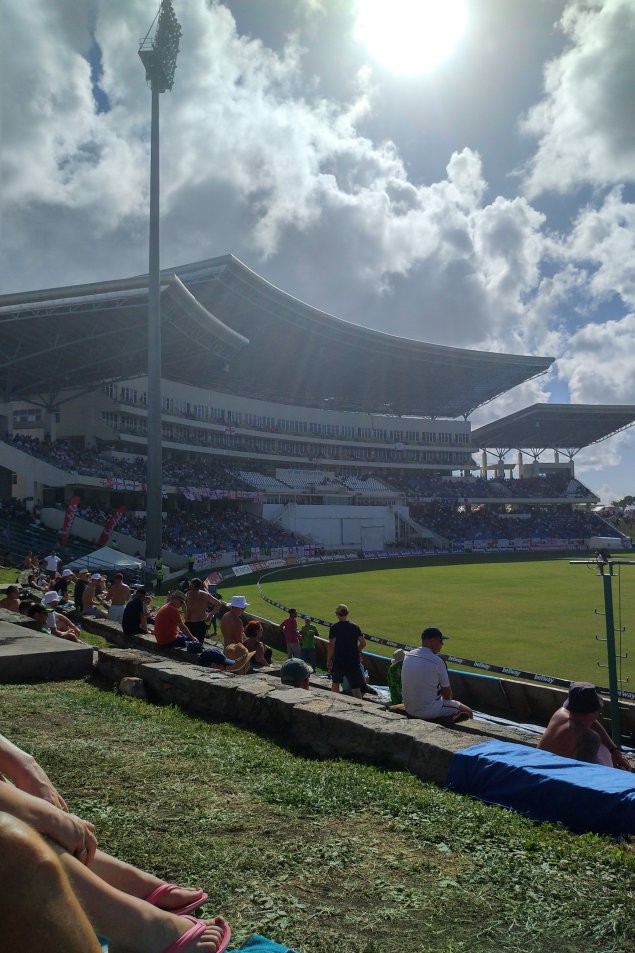 1529: I’ve always felt a high dropped catch ratio is more a symptom than a cause.

1532: There’s a certain irony that after not bowling at the stumps, an lbw decision is overturned because it wasn’t hitting the stumps.

1552: As the sixth wicket goes down, this is all set up for England to have to bat the last 10 overs of the day. Oh dear.

1611: maybe not, given they’ve taken no more since. England really haven’t bowled too badly, albeit the age old complaint about bowling dry rather than making the opposition play still applies – especially on a surface where bounce is variable. But there’s still nothing so wrong with it that isn’t exaggerated by being bowled out cheaply again. Dropped catches just make it worse.

1633: It’s meandering again really. Not that the West Indies will remotely care, as they continue to build a lead that’s now more than useful. But England don’t especially look like wrapping this up any time soon.

On the plus side, the crowd has been doing a fine job of entertaining itself, largely through the locals taking the piss out of the England team, which is fair enough too.

1642: I would consider lying back, putting the hat over my face and having a kip, were it not that it is nailed on the best way to end up on Sky Sports and be faced with relentless abuse forever and a day.

1655: The West Indies have really shown England how to bat here. Bravo is 31 not out off 144 balls. It’s a bit of a stretch to imagine any of the England players managing that. Stokes perhaps but not many others. It’s almost as though application and patience is important in Test cricket, especially on difficult pitches. 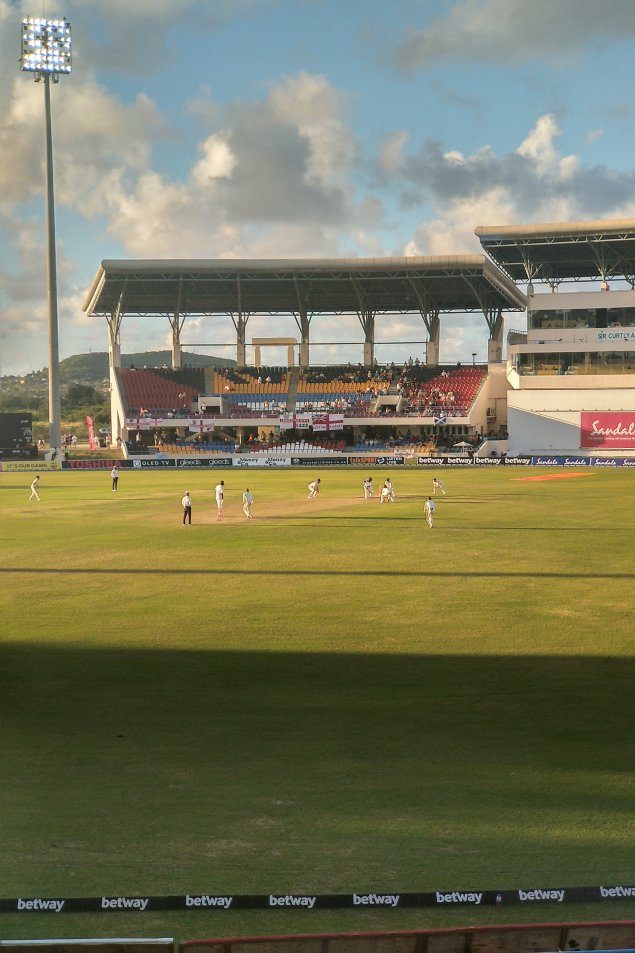 Stumps: West Indies in control, and worse, looking entirely comfortable in doing so. It’s always possible England will come out skittle the remaining wickets in short order, but on a pitch the West Indies attack have looked far better than England (Broad perhaps excepted), it’s already a sizeable lead, if not a decisive one. England will have to bat exceptionally to even set a decent target, and while they certainly can do, the evidence thus far suggests it’s unlikely.

As for the hosts, they gave an object lesson in how to bat on a difficult surface, playing close to the body and not committing to extravagant shots. Sure, they had a degree of good fortune as well, but they rather earned that good fortune through their application. It has been deeply impressive to watch.

To put it another way, the West Indies are completely outplaying England in every department, and for all the protestations about how England’s displays have been aberrations, it looks more and more a difference in ability between the sides in these conditions.

And with that, I bid you good evening and will see you tomorrow. TLG.