As pointless posts go, this is up there. I’m doing an open post for a T20 international played in the middle of September at Chester-le-Street. If we have a poster game for how entirely messed up the current cricketing environment is, this is it. Context? Who gives a stuff about context? It’s a one-off game that doesn’t really count for anything other than a game on the day. This is cricket not as a sport, with results counting for something or other, rather a cricketing version of a comedy series Christmas Special. It stands out, it doesn’t need to fit in with a narrative in the series, and it’s rather bleeding unnecessary other than to make some money.

That’s modern sport. Fuck the competition. To hell with what matters. It’s entertainment. Honestly, if they thought it made more money, we’d have the game as a bloody film event. What’s the downside for the loser? International friendlies in football matter more, because if you lose them, you lose ranking points that cost you seedings when it comes to tournaments. Draws are rigged in the international cricket scene, so don’t compare apples and oranges.

Most of the headlines have been devoted to the third ranked England cricketer in the Power List being left out at his home ground to give him a rest. Number 1. Ben Stokes is the most powerful England cricketer and in my view, it isn’t even close. He’s the highest paid overseas player in the IPL. He won the MVP last year, I do believe. If Ben Stokes decides he fancies earning a million or so dollars every year rather than play an early summer series against Pakistan, then we are in dire straits. The two players above him in the list, Joe Root and Moeen Ali do not have that power because they are not in line to play in the IPL. Stokes is the key to our test team not falling on its arse. He’s been our player of the season. I can’t say I’d be starting up his fan club as I’m not overtly keen on the approach he takes on the field, but as a talent, he’s as good as we’ve had for a while. (I’ve not got a copy of the list yet, but seen Lizzie Ammon’s photo which ends at 44, and with last year’s #39 not on it so far. This year’s #39 is Ian Ward. I’m interested what power he wields!)

There’s no newbies on show for England, who have lost 4 of their last 5 games to the West Indies, so there is little curiosity in the event. Jason Roy and Alex Hales will probably open. Tom Curran is as near as we get to a new international in the line-up. West Indies, who are fast becoming the equivalent of Fiji in rugby, look a formidable team, with new talents like Evin Lewis in the ranks (not that new, he has two T20 centuries already) and captained by Carlos Brathwaite (I remembered his name, but not a lot of his performances since that night). I’m sure it will be super fun as the temperature is predicted to be around 52 degrees and possible showers. Power List #1, aka Empty Suit, is probably thrilled, making cricket an almost winter sport, but I can’t help but feel that this is a bridge too far.

Until you consider we have a FIVE game ODI series to follow.  It’s what the people want, after all. Take a thick coat, and enjoy the show. 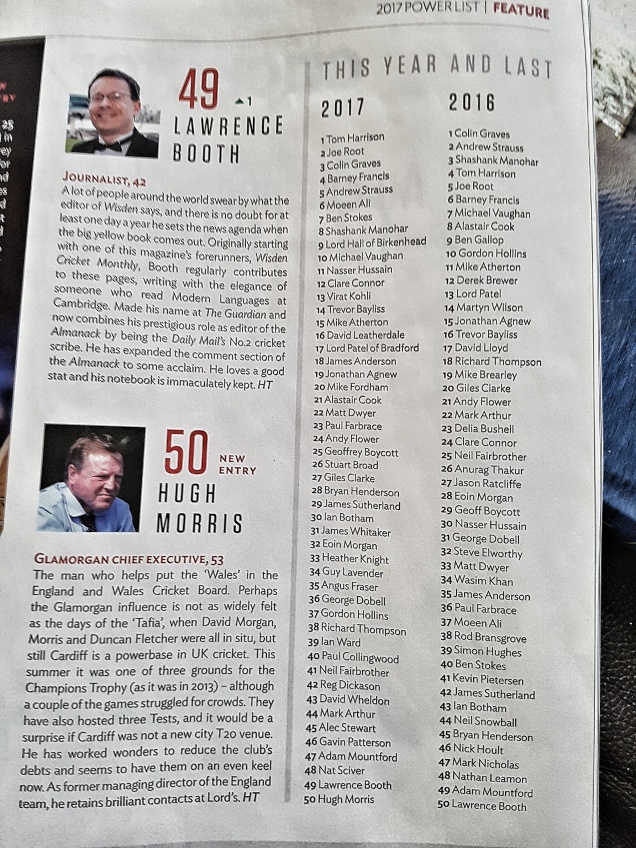