To say there has been a storm in a teacup over the weekend around the availability of certain individuals for the last County Championship game of the season, is me putting it mildly to say the least. There have been claims of dark rumblings going on at the ECB, with rumour and counter-rumour around who would have the influence to pull certain players out of the game and their reasons behind this. We also had the reaction to the news that Adil Rashid had pulled out of the last game of the season, with terse tweets and wild accusations flying left right and centre.

To deal with these both in order, whilst it is undoubtedly disappointing that Jonny Bairstow has been pulled out of the last game and one can also argue that it is particularly poor PR from the ECB, considering the focus that County Cricket has been under over the past couple of weeks, the conspiracy theories don’t really wash with me. The Director, Comma may have spent his career in County Cricket as a Middlesex player and was for a while hobnobbing with the Middlesex board whilst he awaited to be anointed to the position of the saviour of English cricket, but I don’t think the he’s likely to risk his reputation by favouring one county over another. Strauss for all his faults, is nothing but shrewd, and is also unlikely to care enough about County Cricket to actively do his old county a favour at the expense of Yorkshire, he has bigger fish to fry these days. It is though worthwhile remembering how much cricket our international players have played this summer (let alone this year), especially those like Bairstow, who have been picked across all formats – i.e. 7 Tests, countless other ODI’s (I lose county) and 2 T20 games all packed into a narrow summer period. We also must remember that we also have 7 Tests, around 8 ODI’s and at least 1 T20 game in the next 3 months before Christmas too. This is an extraordinary amount of cricket packed into a 6 month period and it gets even crazier next year, so I can’t actually fault the ECB for choosing to rest the majority of their players before the subcontinent tours for fear of burnout (obviously there is a strong argument that we shouldn’t be putting our international players through this type of gruelling schedule, as it’s a one way road to injury, stress related illnesses and burnout, but that’s a whole different argument). In an ideal world, we would have all of our International players fresh and available for the last game of the season, but this is the reality and hence is the reason why central contracts were introduced in the first place, after all the experience of our international players turning up to play Tests after being flogged by the Counties in the 80’s & 90’s didn’t exactly reap brilliant results back then.

With regards to the Adil Rashid situation, I always thought there was a little more to the eye than the terse statements emanating out of Yorkshire yesterday; this from Andrew Gale, I felt was unfortunate and indeed only fanned the flames – https://twitter.com/GaleyLad/status/777485164758831104?lang=en-gb. Of course, there were plenty of those who decided to jump on the bandwagon, accusing Rashid of being a traitor and unfit to wear the Yorkshire shirt again, without truly knowing about the full situation but that’s Twitter for you. This however, wasn’t just confined to angry Yorkshire fans (and there seemed to plenty of them on Twitter yesterday), certain ex-Chief Cricket Correspondent’s couldn’t reserve the opportunity to have a dig – https://twitter.com/selvecricket/status/777524503027019777?lang=en-gb, who said that certain members of our press don’t hold serious grudges around certain players they believe aren’t from the ‘right type of family’. Of course, it then emerged today, that it wasn’t just because Adil fancied lying on the sofa watching Cash in the Attic and eating Pringles in his pants for a week, which the statement below clearly shows. 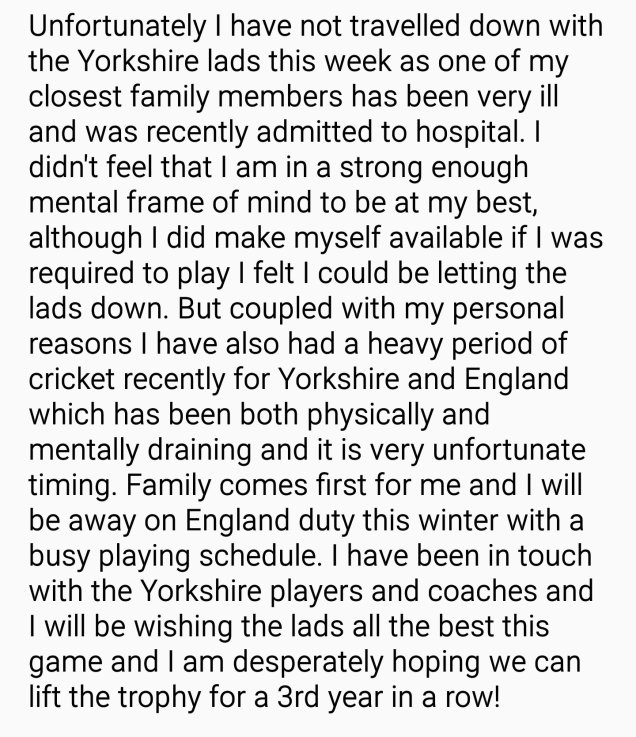 The Yorkshire response has been somewhat baffling, as they would’ve surely known this when the squad was announced and thus it could’ve easily been headed off at the pass with an announcement that he was missing because of family reasons; however this smacks me of Strauss’ “understand but disappointed” stance with Eoin Morgan, and we all know that won’t end well. I’ve been at work all day so haven’t been able to check Twitter to see if those calling for Rashid’s head yesterday, have shown some contrition now more of the facts have come out, but I certainly know the ex-Chief Correspondent of the Guardian hasn’t, nor has he been slow in telling the world that he doesn’t rate him either:

‘Rashid, though, is sailing close to the wind with his club and career: there are sceptics about, some with a greater depth of knowledge than most, and his card has been marked.’

I guess those sceptics that the ex-Chief Cricket Correspondent referred to also happen to go by the name of Mike Selvey too, after all, he’s never one to hesitate in telling the public how right he is and how wrong those who disagree are. He won’t be missed…

There has also been the announcement that the new intake of graduates aiming to complete the Andy Flower ‘flavour of the month’ winter tours has been announced – with 50, yes 50, players getting to spend the winter jumping over obstacles at Sandhurst, having their actions remodelled at Loughborough and then hoping to prove that they are from the ‘right type of family’ in front of the Moodhoover in Dubai. Lucky, lucky guys. This has been mentioned a 1,000 times but just how Flower is still part of the England set up after the 2014 Ashes debacle is beyond me, and more to the point, Flower taking some of our more talented younger players and getting them to ‘play dry’ is not what the supposedly new and dynamic England team are supposed to be about. I bet Bayliss is thrilled. Colin ‘mediocre’ Graves may be number 1 in the so called powerlist, but if you are an aspiring international player, then there is one person and one person only you must impress and that is of course, ‘old smiley’ Flower. Forget about Whittaker et al, they’re only there to take the flak away from Director, Comma when the team plays badly, it’s still the old school special relationship that decides whether you have a future in the International game, full stop. Nepotism still stinks badly as it ever did….

On a final note, and back to the cricket thankfully, the final championship game starts tomorrow with the title’s destination yet to be decided. Whoever does go on and win the championship will fully deserve it, as this season has seen some of the most competitive and thrilling championship games in a long time. I know county cricket splits many on this blog (two of the writers of the blog are very much pro, whereas the other would prefer to stick his head in a shark tank); however whatever your persuasion, the fact that 3 teams are still vying for the title and could win it in the last game is a refreshing change compared to the normal status of after “Lord Mayor’s show”. Although (and here comes a little whinge) it would have been nice for them to schedule the games a little later in the week, so that those of us with jobs might have had the chance to watch some of it, but as we know the fans will always come last in the ECB’s thinking. As a side note, it is interesting that Sky has eventually agreed to show the Middlesex vs. Yorkshire game after rightly taking a bit of a hammering around not giving two f**ks towards the county game. It was fairly amusing to see the blame storming on Twitter around who’s fault it was that the the most important game of the season wasn’t due to be shown live (can you imaging the outcry if that had happened with the football?), though my simple guess is that the management dolts from Sky and the ECB simply forgot that we even had a 4 day competition, after all, anything that isn’t City based T20 is mediocre in their eyes.

For those that do have an interest in the county decider and are lucky enough to be near a TV (or even better, watching it live at one of the grounds), then feel free to comment below.