Well. Here we go again. Scapegoating by “good journalism” after a defeat. We’ve sure been here before. 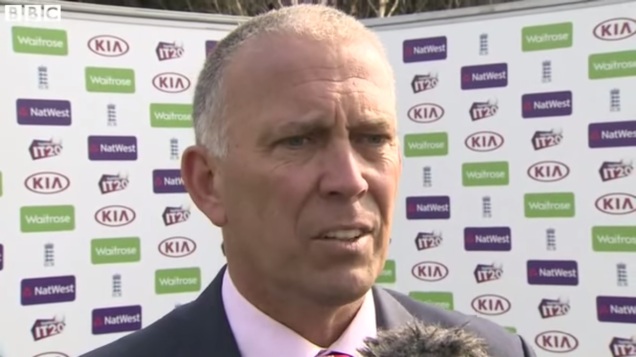 I’ll give Paul Newman something. He sure knows how to rouse the media to a story, and he sure has the “sources” to back him up. Naturally, this prima facie case of “good journalism” throws James Whitaker, Mike Newell and Angus Fraser under the bus, keeps Trevor Bayliss on board as the driver who doesn’t quite know his way, and Alastair Cook as the conductor, shouting and barking his words, but being far enough from the action not to be culpable. Meanwhile, stretching this metaphor beyond breaking point, Strauss acts as Bus Inspector Blakey (from On the Buses for you oldies out there) spouting “I hate you Whitaker” and we have, after one defeat, when a player is left out of the team on health grounds, some unhealthy scapegoats to target. Stop me if we’ve been here before.

Oh yes, and if we weren’t perturbed enough already there’s a begging letter from “the greatest England Coach ever” to come back as some all-knowing, all-seeing eye. Funny how that came out on the day Ben Duckett made 163 in a romp for the England Lions.

Today Selfey and Berry have followed suit with the comments that the current structure is archaic, and that we need a new format for selecting the team. This sort of groupthink, co-ordinated or derived, or both, is the sort we’ve seen for years. Andrew Strauss is still very much in the plus column when it comes to his achievements with Team England, and the Comma Master may well wish to spread his Mindflicking wings and take a good look at a selection process. A process which has had zero scrutiny (in public) once Strauss put it to bed in the immediate aftermath of the I don’t trust KP monologue in May 2015, but out of the blue surfaces when we lose a game quite narrowly, and one of our key players has not played because he was told not to by medical experts – a marginal call some said, but one heeded by the selectors, who were actually doing their jobs.

There’s the rub, and it stinks. Newman tweeted last week, before the test, that Anderson looked fine in the nets, so why wasn’t he in the squad? Former New Zealand bowler Iain O’Brien helpfully pointed out that bowling in the nets was not the same as 20 overs on a flat deck at Lord’s in a test match (in possibly warm weather) and was (maybe temporarily) blocked by Newman on Twitter! (Join the club Iain – but, apparently we are irrelevant and he never reads us, so why he had a fit with me, I don’t know!) My sniffer dog nose for inside tracks was going overboard – why would Newman undermine the selection committee, and medical experts, to the length he’d block a former test bowler for calling him out on it, if there wasn’t more to it? Then it hit you yesterday. This looked like an inside job all right. People running from a decision, and running from their assumptions of a comfortable series win to explain away a surprise defeat. Suddenly Whitaker is in the crosshairs. An inside job.

The same inside job that absolutely looks like has been perpetrated on Nick Compton. Sure, his form merited being dropped, but Newman cites this as another example of the selectors not being fit for purpose. He was “mystified” why Compton was given an extra chance to prove himself at the start of the Sri Lankan series, when that contest against overmatched opposition gave us the chance to blood a new player (ignoring, of course, how successful the blooding of new player James Vince has been) and is now continuing that whispering campaign against Gary Ballance. Both of these are conveniently lumped on top of the non-selection of Anderson in particular as massive errors.

These things do not appear out of the ether. The whispers around Compton was he was a bit of an oddball, a bit intense, a bit “not suited to test cricket”. He fell out with Andy Flower. Rumours were Cook didn’t like opening with him because they were both attritional. Trevor Bayliss never wanted him because he wanted two dashers and a steady one in the top three. Compton was primed to fail. The same whispers about how Ballance refused to change his technique which secured him four test centuries once dropped, which now has him classed as a failure while Hales and Vince await their first. This has all the hallmarks of the impervious inner sanctum of days of yore. You know, the one that there were never leaks from, but plenty of good journalism to go round. You have to wonder who is squawking in the camp, but I don’t think things are as tickety-boo as they were when we were winning overseas series and preparing for a 7-0 summer. For starters, Pakistan were meant to be frail, on the edge, and ready to be steamrollered. Instead, at Lord’s, we got a nasty shock.

The clear inference from Newman, and whoever it is that paints his wagon, is that Whitaker et al took the medical advice that it might be a bit early for Anderson and Stokes, and thought “it’s only Pakistan, Lord’s is a road, let’s save them for next week.” That is now going to be a stick to beat the selectors with, and all of a sudden we have a co-ordinated attack on the make-up of the selection panel. So Selfey comes up with something about camels and drinking brandy with Paul Allott. I’ve not read Scyld. Chris Stocks is on Twitter asking when England’s football team stopped picking by committee. A week ago, no-one was in any rush to condemn the way the England teams are selected. One loss, a player or two missing on medical advice (and remember, Stokes was on a limit of “short spells” this weekend, and Jimmy allowed to play for two days, so there were still doubts), some aspersions cast in James Whitaker’s direction, plenty of people saying “well they looked fine to me” and the selection process isn’t fit for purpose? Pull the effing other one.

Don’t you dare confuse this with me supporting James “GARY BALLANCE” Whitaker. I’ve not been a fan, will never be a fan, and I’m impertinent enough to say he was out of his depth from day one. But he was a useful idiot in the immediate wake of the KP debacle (the car crash interview with Tim Abraham still brings a smile to my face) and then the one later in 2014 with Pat Murphy probably went one better. But he stood there, did his master’s bidding by saying KP was never up for selection and provided a useful bulwark when times got tough. He was certainly less visible than his predecessors, and I’m given to believe he dispensed with the press conferences to announce teams. Probably because he was / would have been rubbish at them. His removal from the position, should it happen, will not be mourned by me. It’s just the way it is being mooted to be changed is classic ECB double-speak.

For Strauss now appears, IF THIS IS TRUE, to want to consolidate power in the Comma. While not quite the same as Ray Illingworth’s legendary One Man Committee, as at this moment in time there are no signs that he wants to be coach as well, the Comma man looks like he wants to become the chief selector if the co-ordinated triumvirate are to be believed. This, I presume, would mean the Comma would need to get out of Lord’s and tour the country watching players. Or, as is being intimated, he watches DVD coverage from around the grounds in the luxury of his office. The selectors do tour the country – if Stocks tries to draw parallels with the England football team, he might remember that the national side does not play at the same time as the Premier League – and get to see players in the flesh, back up what they hear, and maybe get more of a feel for the live situation in a game that sitting in an office doesn’t do. There are good reasons for employing selectors (though two county coaches is probably not the best idea) and not leaving it to a coach who knows naff all about county cricket and a captain who may not have seen all the players (and will have favourites).

We’ve seen Matt Prior’s fall from test cricket. We’ve seen Jimmy’s recent injuries. We’ve seen the mess made of Mark Wood’s recovery. We’ve seen Andy Flower take a litany of unfit or unselectable bowlers to Australia. If a group of selectors take the long view, it is not now a stick to beat them with. For it is the same selectors who picked the winning teams of the last couple of years, and you had little problem with them then. Stop Monday morning quarterbacking, ingratiating yourself with the powers that be, try to rehabilitate Flower, keep Cook’s fingerprints off the weapon, and connect the dots. Because we have here.

Disagree with me? Comment away (I know many of you have). But as someone said on Twitter this morning, there are many reasons to do away with the selection committee, but ignoring medical advice isn’t one of them.

UPDATE – Clive, if I may, I have borrowed your comment on The Guardian BTL:

The thrust of this article is exactly like that of Paul Newman’s in yesterday’s Mail and Scyld Berry’s in today’s Telegraph. I put that down to Sheer Coincidence and the tendency of great minds to think alike, rather than the press having been briefed about the imminent axing of the selection committee and told what view to take.

38 thoughts on “Whitaker’s For The Sack – Comma”