The poignancy in writing this is overwhelming. In 1986 England travelled to the West Indies for a tour where, surprisingly, England were being built up to give the hosts a run for their money. Now, three decades on the common themes I encountered when researching this seem painful. The mention of the never-ending production line of rapid West Indian quicks. The verve and power of the batting, under the power of Viv Richards, the human tour de force. The packed crowds, jamming every corner of every ground, climbing trees to watch at homely stadia across the region. It’s almost cliche to look back like this now. But it’s painful. They were, really, that good. Put them on their own wickets, with conditions in their favour, they were invincible when at their best.

The anniversary of that tour clicks to number 30 this weekend, and I thought I’d do a little, or long, recap on thoughts of the time, and in hindsight. I’ve read up on the tour using the relevant B&H Yearbook (the 5th edition) and Wisden. The first part deals with the run-up to the series, the second starts at the first test and I hope to complete over the weekend. So, after that intro, Part 1….. 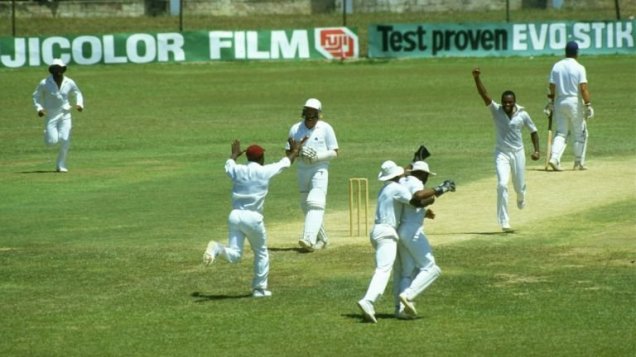 On 1 February 1986 England started their ill-fated tour of the Caribbean with a warm-up match on the island of St.Vincent. What was to ensue over the next few weeks was the cricketing equivalent of a mismatch. Unlike, for example, David Haye’s recent victim, England had to keep getting up after being knocked out, ready to take another pummelling from a far superior foe. The captain’s ship wasn’t just sinking, it was being ripped apart at the seams. We shall never see the like from those shores of the Caribbean ever again. So I thought I’d just write a few personal memories of the test series that confirmed that lightning really could strike twice. I was a schoolkid, keen as mustard on the sport, and hoping for the best, but fearing the worst.

Let’s put this into the context of the times. I’m guessing most of my readership are more than aware of how we got to where we did, but it does no harm to look back. Mid-80s English cricket had major heroes like Gower and Botham, but were looking down the barrel. Rebel tours took out some good players. The production line wasn’t exactly rolling top players into the team. We started losing to foes we never used to, such as New Zealand and Pakistan. Then, in a painful series, England were hammered 5-0 at home by a rampant West Indian force in 1984. The Blackwash series. They slaughtered us by an innings at Edgbaston, chased down 340 odd in just over two sessions at Lord’s, handed out a one-handed beating at Headingley, had Greenidge, Dujon and Davis take us apart at Old Trafford, before applying a routine coup de grace at The Oval. If England managed to get through the top order, the lower order helped bail the West Indies out. Even if they did, no-one thought we’d match their scores anyway. Defeatism reigned. Once Larry Gomes punched that ball to the boundary at Lord’s to chase down that 340 odd for the loss of 1, we really did put the dead into dead rubber. Hell, we got excited at Headingley because Paul Allott bowled well.

But there was a significant but. England were without their Apartheid Tour players and the bans were soon to be lifted. This meant the automatic reinstatement of Graham Gooch, probably the insertion of John Emburey, and maybe Peter Willey as well. The England selectors of the time certainly didn’t hold this betrayal against the various participants, as the 1985 Ashes series saw Gooch, Emburey and Willey in the team, and with Sidebottom and Les Taylor also given a shot. It always brings a smile to my face when you see some of the outlandish stuff now about “team culture”. Our keeper at the time was Paul Downton…..he didn’t rebel tour. Just thought I’d throw that in.

There was a definite whiff of optimism in the air going into 1985 and the “strengthening” of our team because a redoubtable band of men, without Ian Botham, went out to India and won 2-1. Tim Robinson, one of my favourite bats at the time, making a magnificent 160 in Delhi to set up a levelling win, and then Fowler and Gatting making double hundreds in Madras, as it then was, to back up Neil Foster’s excellent bowling to put us 2-1 up. Fowler made 201 there, and was dropped, never to play for England again, after the next test. He could probably feel a bit more peeved than most at the forgiveness shown to rebel tourists.

We won the Ashes 3-1 against a pretty feeble Australian team, kept afloat by Allan Border and Craig McDermott. It was a great summer of batting, England winning the last two test matches by an innings, including 300+ partnerships in both matches. Tim Robinson made two hundreds, so did Gatting, Gooch got a 196 at The Oval and captain Gower made three tons, all over 150, including a 215. As a kid watching that partnership at Edgbaston between Gower and Robinson, I was transfixed. My old favourite with my new.

So we were hopeful going into the next tour, the hardest tour. I was in the A Level years at school, so I was no callow youth, but I do recall reading all the previews and the suggestion was prevalent, if I’m correct. “Although no-one underestimates the strength of the opposition, one thing is certain. It won’t be another blackwash.” The old logical gene was going off the charts – they are at home, the wickets are fast, their bowling is miles better than ours, and their batting isn’t exactly crap, especially now Richie Richardson is established and looking good. But then hope over-rides that (and why that first test win in Jamaica in 1990 was so special) and you think about those writing these things “well, they must know what they are talking about…..”

These were the days before live TV coverage of cricket overseas. BBC would dabble with a little live play from Australia if it got interesting on an ad hoc basis, and we’d get the Channel 9 highlights (and those from New Zealand too with Peter Williams, I think, about as unbiased an anchor man you could ever have) for those tours. But there was nothing from the West Indies other than what the news would show you for five or ten seconds each night. On some occasions there wasn’t, I recall, total radio coverage because BBC with just a few stations weren’t prepared to have key slots taken up with the cricket. It is why one of my recollections of the first test was tuning into LBC (a London radio station where Jeff Stelling cut his teeth on football score coverage) every half hour to hear the Sunday score.

In these days of wall-to-wall coverage of pretty much all international cricket, you’d think the situation back then would be hell, but it really wasn’t. Sam Collins (yes, a name drop) said to a number of people talking to him after the DOAG screening I went to earlier this week, that it was like Stockholm Syndrome. We were grateful, extremely grateful, for whatever we got. There were no campaigns to get this live on the TV, because we had four channels. The technology did not exist. It was radio or nothing. When that coverage included the tones of Tony Cozier, it seemed absolutely dreamy. Exotic. Brilliant.

The tour, commencing on 1 February at the Arnos Vale (not Grove, you muppet. That’s on the Piccadilly Line) ground did not start auspiciously. The weakest team in the West Indian domestic competition bowled England out for 186, yet England fought back and bowled themselves to a small lead. This was not to prove vital. England barely scraped into three figures on their second dig, and the home team knocked the runs off for the loss of 3. This did not augur well. The one half century in the match was a 77 made by Mike Gatting, who at least had shown he was up for the challenge. The top score in the second innings? 18 by David Smith and Phil Edmonds. Desmond Collymore, the chief destroyer in the first innings with a career best 5-34, averaged 38 with the ball in the Shell Shield that year. We weren’t talking Marshall or Garner.

On to the Leeward Islands and another sketchy performance, but decidedly better in the first innings. The hosts made 236 with the wickets being shared around, and although no England player made three figures, they scored over 400 and set up the match. Leewards got to parity with 4 wickets down but Ralston Otto, a cousin of Curtly Ambrose, made 92 not out and set England 116 to win. The Leewards used two bowlers for the 34 overs that it would take to get these runs. At one end was Leicstershire man Winston Benjamin, and at the other, bowling superstar Richie Richardson! The latter actually took five wickets as England collapsed in a heap and finished grateful for a draw with 8 wickets down and 94 on the board. Tim Robinson, with 32, was the only one to hold his head up high. It wasn’t good.

The third prep game was against Jamaica, and England sealed a victory against one of the stronger sides in the West Indies. Gatting and Lamb made runs in the first innings, Lamb again in the second but still no hundreds, while the Jamaican wickets were well spread, with Les Taylor taking a lot of the top order scalps. England registered a 158 run win.

Of course back then England’s test and ODI teams were picked from the same squad and the fixtures were inter-mingled. The opening match against the full national side would be an ODI fixture at Sabina Park. A match that will live in infamy for the introduction of Balfour Patrick Patterson to an England team, and a projectile from Maco into Mike Gatting’s septum.

“A bad injury to Gatting, whose nose was broken when he missed an attempted hook off Marshall from a ball which cannoned off his face into the stumps, did far more damage to England than West Indies’ easy victory. They won with thirteen balls to spare in a match reduced by eight overs by their own slow over-rate, four fast bowlers and off-spinner Harper managing only 46 overs in the allowed 200 minutes. After England had been sent in, Patterson made immediate inroads by dismissing Robinson and Gower with his fourth and eighth balls in international cricket. Marshall prevented a full recovery by bowling Gatting and Gooch, and though Lamb and Willey added 62 off sixteen overs, England could not put West Indies under pressure. But for careless strokes by Gomes and Richardson with 7 runs needed, the margin would have been eight wickets.”

The ODI had been a disaster. All the fragilities we feared were exposed. The batting could hardly score at a pace to make us competitive, 145 off 46 overs. Marshall, Patterson, Garner and a young Courtney Walsh (Holding had been injured in the Jamaica match) gave us nothing. Then the West Indies scored patiently to win with a couple of overs to spare. The tests were just around the corner. The foreboding, immense. One thing was certain, 5-0 was a possibility all right.