As The Leg Glance battles enthusiasm problems I share with this test match – if England and their apologists, I mean the media, play and say like this doesn’t matter, then why should we care – I thought I’d pick up on a few points that the whirlpool that is Social Media and background research have thrown up.

Due to some circumstances I may delve into a lot later, I might be in the market to go to the Oval test this year. I think Pakistan might be a decent opponent, Younis Khan, Azhar Ali, Asad Shafiq, Sarfraz Ahmed and the venerable Misbah-ul-Haq are good players, even great, and different from the stuff we’ve seen recently. So I went on to the Surrey site to see the state of ticket sales.

Day 3, Saturday, is almost sold out. There’s odds and sods about. Same, but with a few more, for the Friday. But Day 1 is not well sold, and Day 4 would be an utter embarrassment if that’s the final tally. The prices aren’t overly attractive for the first three days. The cheap seats in the OCS Block 1-3 are £50. Where I usually sit, which was always priced the same is now £60. This is, we are told, an attractive, attacking England team. A team we should be getting behind, with great, exciting young players. Doesn’t seem that message is getting across.

In something tangential I wanted to look at the last set of accounts put out by the ECB. They are from January 2015, covering the previous 12 months. Apart from seeing that a director was given £190k to sling their hook – two directors left that year, and the clear implication is that this could be Collier – there was also the notable £24m added to the reserve pot. 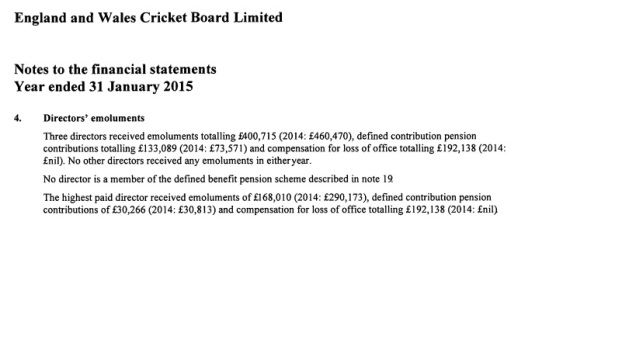 The ECB say they budget on a four year cycle and that two out of the four make a loss. I looked at the ticket situation for Day 1 at Durham against Sri Lanka (a Friday) and it looks hopeless.

This was just a spot check. Innocent Bystander tells me that Lord’s tickets for both test matches at Lord’s are going on general sale for most days. We sit back and say test cricket is in rude health in England, but is it outside of the Ashes? Really? The prices at the Oval do not match demand, and there’s a bit of a nod with the lower prices for Day 4, but cricket has to face up and wonder what it can do – stuck between the Sky money vice, and the clear lack of visibility this team with its exciting young talent has.

Which then leads me on to the panacea that is a T20 competition like that which has just finished in Australia. The Big Bash has, for a couple of years now, had envious glances cast from here at the slick running nature, the big crowds, the buzz and excitement and yes, glamour of it. We know the arguments and we’ve been over them countless times. I hear people say the competition lacks quality – it doesn’t; I hear people say it is the free to air TV that makes it – that may have a point; the size of the grounds and the climate lend to the spectacle – they do; but to me the key is that it runs for a month, has a clear Final and a limited number of teams (8). Many more than this and it would go too far and dilute the quality. There is no answer that meets the demands of the English summer. But in a year when we’re not selling test matches out, the very thing we are supposed to be shit scared of protecting, that line of defence doesn’t look strong. Nor does our argument about diversity of opposition because, as we see, it’s Australia for the crowds and India for the TV and the rest are loss-makers.

The Big Bash saw a notable performance in both the semi and the Final by Kevin Pietersen. It doesn’t really prove anything we didn’t know. He’s not done, but he’s also not coming back. That doesn’t make it a closed matter not to talk about how we got here, and it doesn’t make it OK for the ridiculous abuse any tweet on him gets, which Maxie encapsulated superbly in a Tweet today:

Reaction to @NHoultCricket 's @KP24 Tweet underlines the tragic degree to which the ECB's lies have poisoned English cricket.

There were some on here who didn’t wish Cook the greatest of success…but is it on the same scale as this?

@NHoultCricket i'm not losing out 1 bit. Getting rid of that corrosive individual has enabled players like Root to thrive

If there’s a post on Twitter on KP, this bloke is usually there.. accusing others of obsession.

@NHoultCricket it's not a shame at all. This weird obsession that some middle-aged men + some women have with kp is pathetic and boring.

@NHoultCricket KP would probably text the bowler to tell him how to get Root out.

@__Conda @piersmorgan @alextudorcoach No he is a complete dickhed, and has behaved like an arsehole for years, good riddance.

@KP24 your team lost in the final, and all you talk about is yourself!! Your not a team man at all. Self obsessed #banger #goodriddance

@KP24 keep dreaming tossa ur international career is over

I could go on. I think I made my point. The scale of abuse, the level of vitriol. Still…..

Nothing brings out the true bile, the true visceral hatred, than KP playing a really decent knock.

Don’t forget, comments for Day 4 of the test can be placed on TLG’s latest post. My best wishes for the week…..