The next Dmitri is awarded to someone who has, in many ways, defined the England cricket year. On his appointment to replace the incompetent Paul Downton, Andrew, Strauss took the bull by horns, sacked Peter Moores, canned KP and brought in the coach no-one thought was a serious candidate. He set in train a number of events that meant this was a memorable year for the game in England, but also showed that a number of key principles had been put in place. 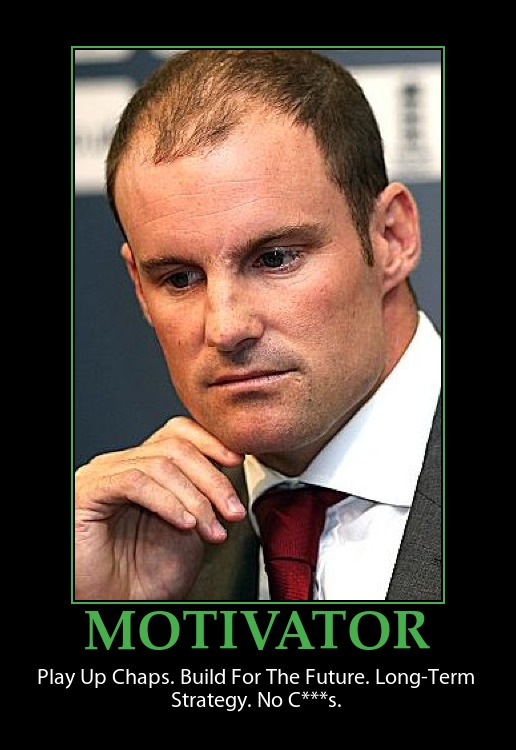 That Andrew, Strauss has had an eventful year would be a little bit of an understatement. After his retirement from the England cricket team in 2012, he walked into the Sky commentary box for the 2013 Ashes and beyond, and proved pretty much why he should have stuck to the playing side. In a box that contained lightweights like Knight and bores like Warne and Botham, he just did not carve a niche. His whole time in the commentary box was overshadowed when he called a certain someone a certain word when he thought he was off air. In a taste of things to come, the press came to his aid, like Walter Raleigh for Good Queen Bess, and the whole thing was laughed off. Sure, he apologised, but it did rather paint a picture, didn’t it?

When my main source of comedy material was booted out after the World Cup, there became a little bit of a beauty parade to see who might fill the mighty Downton’s boots. Would it be Shiny Toy Vaughan, with his snap judgments, his greatest ever addiction and his “lad” persona on Twitter? Would it be Alec Stewart, a man who carried out the job on offer at Surrey, with a continuous role in the game, gravitas and respect? No, of course not. It was always going to be Strauss. He’d have taken the job at the time Downton took over, but they thought it was too soon. It was Strauss from the moment Downton was ditched. There was no suspense…..

When he was appointed I thought immediately “KP – gone”. While they had appeared to have papered over the cracks in 2012, the bon mot on Sky said that was a lie. I’ve had an independent source confirm to me that the divide runs very deep. That’s not exactly a world exclusive. So when KP scored that 355* there was no doubt it wouldn’t change Strauss’s mind. So while many of us still have grave problems with the way the decision was made, the justification for it, and the premise it was based on (we will not pick our team on merit alone, but on personality and held grudges), it would be unfair to say that’s the only thing he’s done. And I don’t mean the shambolic sacking of Peter Moores, which gave Strauss an early peek at how things work in the ECB Media world. To be fair to them, they’ve tightened up that aspect considerably this year.

Strauss’s clear best move was appointing Trevor Bayliss, which, in hindsight should have been done last year instead of the Moores Mistake. Bayliss has had an immediate impact on the ODI team, so that we have an invigorating, exciting bunch playing cricket we could only dream of. Eoin Morgan’s retention as captain has also been a major plus for Strauss, because received wisdom was that Joe Root would take it on as a dress rehearsal for the big job in a year or so’s time. Under Morgan, Bayliss and Farbrace, faith has been put in Hales and Roy, who both made their maiden ODI hundreds this year, given free rein to Joe Root and Eoin Morgan in the middle order, and allowed Jos Buttler to do his thing knowing he has hitters around him. The bowling looks more tricky, but if the batting is this lethal, some sins can be covered. Strauss has made this a priority and short term rewards have ensued. It does look, though, as if some long-term strategies are now in place, with key players not too old, and a modus operandi being developed for English conditions. That future is bright.

His bonus came in the form of an Ashes win. Now we’ve had some varying opinions on here about this series and its true relevance. The diehard England fan, the sort that thinks this blog is an abomination, believes this to be one of the great triumphs of the modern era, and I’ve even seen it suggested (by one muppet who seems to have disappeared) that it was better than 2005. Those of a more sceptical lean are quick to point out that pitches outside of London were made to suit our attack, and in some cases, to an unfair degree. It is a debate that will linger. To me there should be a balance to the wickets, and that home conditions should be an advantage but not a decisive one. To that degree, although it was slagged off, Cardiff was the best pitch of the series. However, the view of many was that the condition of the wickets were dictated by the ECB and possibly Strauss. He denied it, but there was that thought that England had stacked the deck. I’m not so sure, and even if I was, I’m not so sure I care that much except that no test went five days. Some barely made it to the half-way stage. That can’t be right.

But winning the Ashes gave Strauss important breathing room, an argument to counter the pro-KP faction (there still isn’t a coherent one for not picking him for the T20 team) and the media did their thing by anointing Mr Mindflick as a genius, pouring on aplomb, genuflecting to his genius. Strauss has had a good first year in charge, of that there can be no doubt, but the success of the test team other than the Ashes, and certainly away from home remains elusive. The batting is in a mess, the bowling too dependent on two bowlers with many miles on the clock, the keeper not nailed down, no spin bowler standing up to be counted and no real bright shining lights in sight. They’ve now seen off Bell, and it remains to be seen what happens next. So while the ODI side is full of hope, the test team is a massive work in progress, and quite frankly, not as good away from home as the sum of its parts. An Ashes win, as odd as it was, will only go so far. Strauss has a lot of work to do, but there is no doubt he’s been an integral part of much of this year.